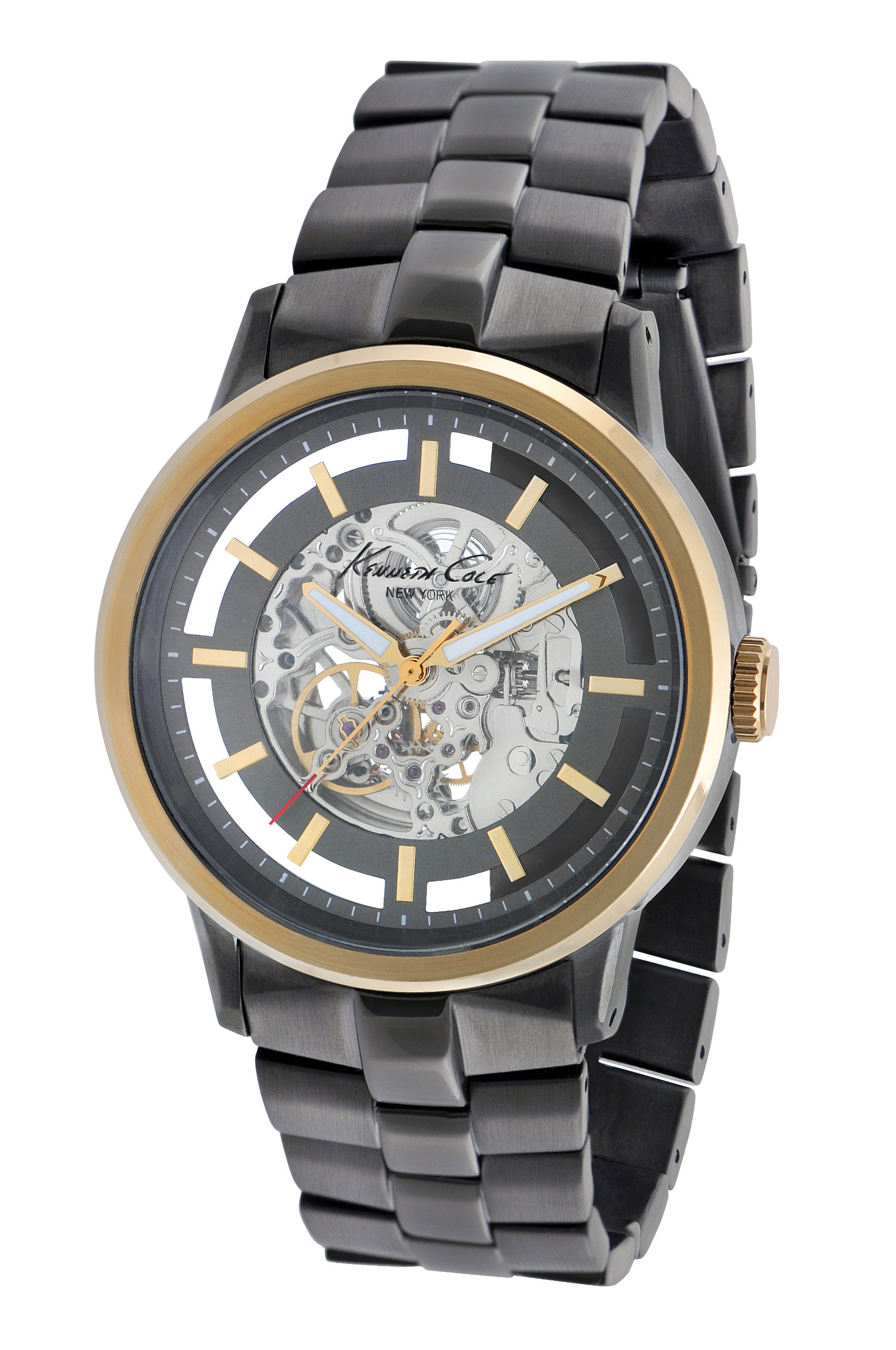 About The Company Kenneth Cole Productions, Inc. is an American fashion house that was founded in 1982 by Kenneth Cole. Having grown from its footwear roots, Kenneth Cole is now a full lifestyle brand that is forever committed to pushing the boundaries of convention and embracing the notion that, "Today is not a dress rehearsal." Kenneth Cole's stylish collection of clothing, footwear and accessories is refined yet functional. Kenneth Cole has manufactured high quality Timeless, classic and elegant watches and accessories that can be worn for every occasion. The classic and sophisticated timepieces from Kenneth Cole have high-quality standards, anti-allergenic, comfortable to wear and special in their unique design. New York Series Kenneth Cole New York is proud to be a part of Geneva Watch Group. Our collection of iconic modern classics is a refined reflection of the Kenneth Cole New York heritage. Created with the utmost quality and design, these essential pieces exemplify urban, sophisticated style for the fashion conscious and socially aware. New York series has the most expensive line of fashion wrist watches for men and women. All the watch cases are made of stainless steel and topped with a mineral crystal glass for protection. The straps are either made of genuine leather band or high grade stainless steel bracelets. All the watches come with a limited 2-Year Warranty. Our classic looking top rated watches make for good business gifts for all designer fashion centric wristwatch lovers. Minimalists will also love our casual and simple yet smart and luminous models. From exercising, sports, hiking or running and swimming underwater with your dog at the beach to detoxing from the day at home in a robe with a glass of wine and your electronic gadgets. Even the smallest changes in optics can be a large under marker of your core and proof of your worldly taste. Don't zone out or out...stop being a resistant dinosaur and unmask your potential with one of our quality accessories which mesh both time and royal bracelet strap styling. Don’t be led to the mine field of inexpensive clearance or sale watches. Makeup your mind to be the first one to stand up and face times of focus with the best of military accuracy. Fashion Designer KENNETH COLE founded his company, Kenneth Cole Productions, with the debut of a ladies' footwear collection in December of 1982. Today, the company manufactures internationally and distributes men's and women's footwear, accessories and clothing under the Kenneth Cole, Reaction, and unlisted.com labels, as well as offering over 30 product categories. The most recent addition being the Kenneth Cole Women's Collection due to debut for Fall 2000. Kenneth Cole retail stores have expanded throughout the United States and abroad in Amsterdam, Hong Kong, Singapore and Taiwan. The Kenneth Cole Catalog mails to over 3 million consumers a year and the award-winning Kenneth Cole and Reaction websites receive thousands of hits per day. Kenneth Cole's marketing savvy has earned the Company a renown image as a forerunner of fashion and trends. His controversial advertising campaign has garnered worldwide attention for its humor and social consciousness. In 1985, Kenneth Cole was the first member of the fashion community to take a public stand in the fight against AIDS. Since then, he has continued to support the global fight through both personal and corporate initiatives including the dedication of an ongoing portion of marketing budget to public awareness initiatives. Cole continues to serve as a National Board Member of both AmFAR: The American Foundation for AIDS Research since 1985 and the HELP U.S.A. Homeless project since its inception in 1987. Kenneth Cole has been recognized for his design and business talents as well as for his philanthropic involvement. The Creative Coalition honored Kenneth with their Spotlight Award for dedication to increasing public awareness; Amnesty International honored Kenneth Cole with their 1998 Media Spotlight Award. Kenneth was simultaneously chosen as Humanitarian of the Year by Divine Design and the CFDA presented their Award for Humanitarian Excellence to Kenneth Cole in 1996. Kenneth Cole has been awarded the Extraordinary Voice Award by Mother's Voices for his continued efforts in AIDS awareness. Cole was recipient of the Council on Foundations 1996 Humanitarian Leadership award. Kenneth Cole has received the footwear industry's highest honor as Footwear News' Person of The Year". Fashion Footwear Association of New York (FFANY) honored Kenneth Cole with The Fashion Medal of Honor Award at their 1997 Gala. Every year since Kenneth Cole Productions went public in June of 1994, Kenneth Cole Productions has been on Forbes' annual list of the World's 200 Best Small Companies in America. In addition, each year as a public company, Kenneth Cole Productions is named on Business Week's list of Top Hot Growth Companies. Kenneth Cole Productions continues to declare "What you stand for is more important than what you stand in" and "To be aware is more important than what you wear." Known mainly for its shoes, Kenneth Cole Productions also makes stylish clothing and accessories under three brands: Kenneth Cole New York, Reaction Kenneth Cole, and Unlisted. It also licenses the name to products such as hosiery, luggage, watches, and eyewear. Kenneth Cole continues to expand, adding new lines for women and children and a men's and women's fragrance. More than 4,500 department and specialty stores carry its products. Kenneth Cole also operates about 80 retail and outlet stores, a catalog, and a Web site. CEO Kenneth Cole owns 45% of the company and controls almost all of the voting rights.
Show More
Reviews