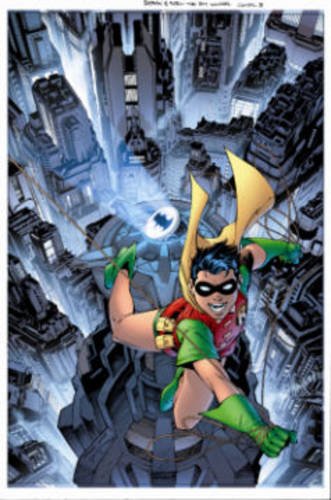 Holy anniversary, Batman! Every knight needs to have a squire,
and every Sherlock Holmes must have a Watson. So it has been with
Batman and his partner in crime, Robin for seventy-five years.
The Boy Wonder’s spunk and color balance against the Caped
Crusader’s seriousness and gloom to create a perfect partnership,
a Dynamic Duo.

Though Batman has always needed a Robin, it hasn’t always been
the same Robin. Many different crimefighters have taken up the
name and costume, from jovial Dick Grayson to calculating Tim
Drake to violent Damian Wayne. Each left his or her mark on the
character, and today the Boy Wonder almost as recognizable and
beloved as the Dark Knight himself.

Robin, The Boy Wonder: A Celebration of 75 Years