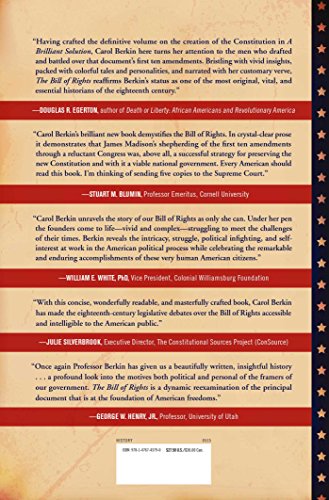 The real story of how the Bill of Rights came to be: a concise,
vivid history of political strategy, big egos, and partisan
interest that set the terms of the ongoing contest between the
federal government and the states.

Revered today for articulating America’s founding principles, the
first ten amendments—the Bill of Rights—was in fact a political
stratagem executed by James Madison to preserve the Constitution,
the Federal government, and the latter’s authority over the
states. In the skilled hands of award-winning historian Carol
Berkin, the story of the Founders’ fight over the Bill of Rights
comes alive in a gripping drama of partisan politics, acrimonious
debate, and manipulated procedure. From this familiar story of a
Congress at loggerheads, an important truth emerges.

In 1789, the young nation faced a great ideological divide around
a question still unanswered today: should broad power and
authority reside in the federal government or should it reside in
state governments? The Bill of Rights, from protecting religious
freedom and the people’s right to bear arms to reserving
unenumerated rights to the states, was a political ploy first,
and matter of principle second. How and why Madison came to
devise this plan, the divisive debates it fostered in the
Congress, and its ultimate success in defeating antifederalist
counterplans to severely restrict the powers of the federal
government is more engrossing than any of the myths that shroud
our national beginnings.

The debate over the founding fathers’ original intent still
continues through myriad Supreme Court decisions. By pulling back
the curtain on the political, short-sighted, and self-interested
intentions of the founding fathers in passing the Bill of Rights,
Berkin reveals the inherent weakness in these arguments and what
it means for our country today.

The Bill of Rights: The Fight to Secure America's Liberties